Home world The Reds are back! Voice of America ‘promotes’ Communist leader to PM… showing…

The Reds are back! Voice of America ‘promotes’ Communist leader to PM… showing… 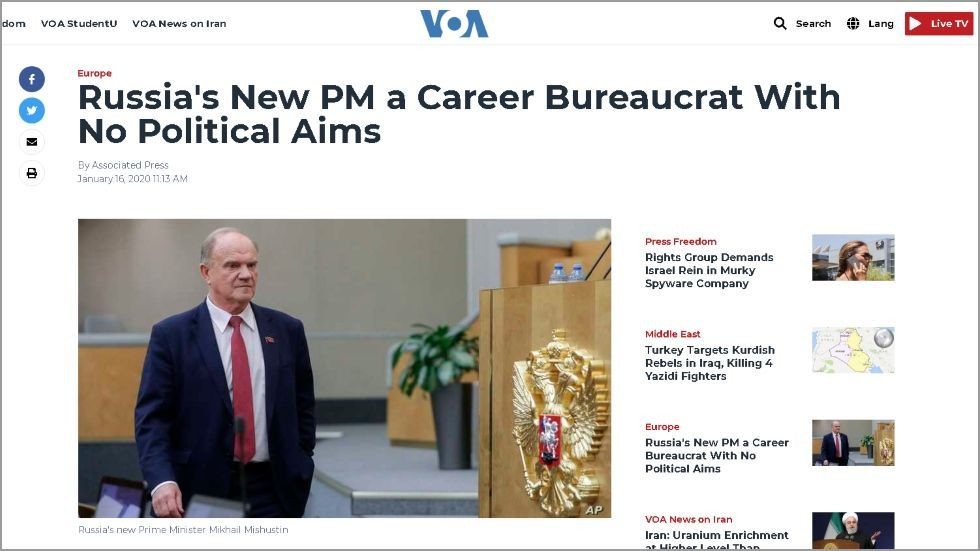 Voice of America, sponsored by the US government, is aware that Russia's new prime minister, Mikhail Mishustin, is "a career bureaucrat who never had political ambitions", but, strangely, he doesn't seem to know what the man is like .

Many compliments to the US agency for noticing a major shake-up in the Russian government, but someone at the table needs to read the country's internal affairs, it seems – at least for better facial recognition. A photo of former Communist Party leader Gennady Zyuganov appeared on VOA article about Mishustin – which was ratified by parliament as prime minister on Thursday.

The caption below the photo reads "Russia's new Prime Minister Mishustin" – and neither the photo nor the caption seems to be getting anywhere more than an hour later. Who would care to check, right?

Remarkably, the two men do not bear much resemblance. Zyuganov is 23 years older than Mishustin and has more hair on his head than the almost bald Prime Minister.

Even a noticeable Soviet red-flag pin on the communist leader's jacket was not enough to arouse the suspicions of VOA photo editors.

It may be assumed that some clever allegory is at stake (no matter what the legend) – but neither does Zyuganov fit the definition of "he never had political ambitions as a career bureaucrat". The longtime politician ran for president of Russia four times during his career (but always lost). It is hard to say whether he would be content with the prime minister's office – as long as someone offered it, of course.

If you are still wondering what the new Russian Prime Minister Mishustin will look like, check out the verified photo: