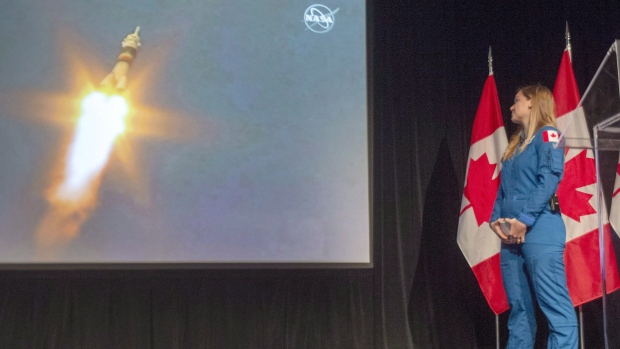 It's a small step toward the moon, but a big leap for two Canadians.

Joshua Kudryk and Jenni Sidey-Gibbons graduated on Friday along with 11 Americans from NASA's basic astronaut training and will be part of the next generation of space explorers hoping to return to Earth's satellite and beyond.

"We want to be part of the international collaboration going to the moon," Sidey-Gibbons said in a telephone interview from Houston. "My goal is to do that."

Kudryk, 37, is from Fort Saskatchewan, Alta., And Sidey-Gibbons, 31, is from Calgary. They spent the last two years at Houston's Johnson Space Center, where they studied everything from Russian to spacewalks. There is at least a few more years of training before any new astronaut gets a mission.

Kudryk, a fighter test pilot and holder of three postgraduate degrees, said he could not wait.

"I look forward to carrying on the torch of the Canadian space program. Given our size, it has been immensely successful."

That first look at Earth from above would be unforgettable, said Sidey-Gibbons, who is a PhD in engineering and a former professor at Cambridge University.

"Seeing Canada for the first time, looking at Earth, must be a profoundly life-changing moment. To be able to describe it to people and hopefully bring these photos back and share them with Canadians would be really especially for me. "

The US space program has pledged to return to the moon by 2024 and perhaps establish a base there. It would serve as a platform for a possible mission on Mars.

"It's happening," said Kudryk. "Probably the best part of my job is working and seeing that work being done every day."

Canada, through the Lunar Gateway program, is part of this.

Both Canuck space travelers expect continued space effort to produce significant benefits for those who remain on Earth.

"The reason we have this phone in our pocket is because of the miniaturization of electronics that began in the Apollo era," said Sidey-Gibbons, referring to the US effort that landed the first man on the moon in 1969.

"We solved problems in space that help us have a better life on Earth," said Kudryk. "There are literally hundreds of experiments being done now as we speak at the International Space Station, specifically related to health care, to deal with aging and disease."

Astronaut training is highly technical and physically exhausting. Sidey-Gibbons said the most valuable lesson he has learned is about humans.

"The most important thing I learned is how to be an effective crew member. The communication and expedition skills that the Canadian Space Agency and NASA emphasized for us were very helpful in learning to live and work with others.

"It has been a priority of our class to have these skills and develop them together."

This report from The Canadian Press was first published on January 10, 2020.